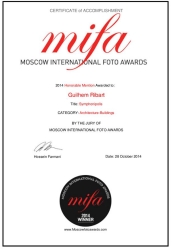 I’m thrilled today to tell you more about my recent awards received at Moscow International Fotos Awards 2014! This year was the second iteration of this competition and was directed by Hossein Farmani who is very famous for having championed many photographers and to promote of all aspects of “The Art of Photography” to a very grateful world-wide community.

He’s for example the founder of the award winning “International VUE“, the first ever Los Angeles based fashion magazine. After the success of Vue, he developed yet another new venture by combining photography with publishing. FotoFolio was the result of that effort, born to promote the work of contemporary photographers across the country.

FotoFolio too, won numerous awards of it’s own and is in the permanent collection of The Library of Congress.

The MIFA is one of his last achievement and perfectly suits to his own purpose:

Moscow INTERNATIONAL FOTO AWARDS is a new exciting photography contest, created by people who brought you Paris Photo Prize. The MIFA’s mission is to recognize, reward and expose talented photographers from around the world and introduce them to the creative community in Russia.

I’ve to say that being new in the photography market,  I had no idea of this! I decided to attend 2 categories suited with my work: Building & Architectyre and Children.

My first exhibition ever was about Architecture and the buildings of La Grande Motte, the french seaside city along the Mediterranean sea with a collection of more than 40 photographs I had never tried to promote after this exhibition, even in Photography competitions.

But I really like these photographs and that’s why I send them to compete with the secret deep hope that one day they could please someone else because I was sure they have a great potential, mostly in contemporary art.

And I was not wrong because this whole serie of 8 photographs won the award in their category with an Honorable Mention! Actually, this the highest price I won until now and I’m really happy because it means that these photographs are going to have a second chance, a second life!

It took me more than 3 years to perform this work about La Grande Motte architecture. I have invested much time and money at a time where photography was only a hobby and this first exhibition was only a personal accomplishment. I wanted to prove to myself that I was able to perform something really different from my job then.

I was then working in a Strategy and Management consulting firm and my missions were to help big international companies to reach a better productivity by implementing new organizations, improving their management, help them to implement change management processes and to reduce their footprint over the planet by reducing their gas emissions.

Useless to say that the work was fascinating but also time consuming. And this first exhibition made me see something different. It has been the first step of a global reflexion about my life and my projects! Actually, I can say now that it saved my life! Literally!

But this job also helped me to combine rigor and project management in my wish to live thanks to the photography!  The main difference is that I’m now working on my personal project!

My wish now is to encounter people, new cultures and new ways of living. That’s why I travel a lot since 1 year now.

I’ve been in some arabic countries in Africa, Morocco, Tunisia and Egypt. I enjoyed my stays there, meeting and talking with people to try to understand how they perceive our european countries.

I’ve witnessed the ravages of the occidental TV about how they perceive our culture with our violent movies, our video clips that show naked women dancing on aggressive RAP songs and our recurrent desire to interfere with internal affairs of others countries for the petrol or mining.

We look very aggressive to them and I’m sure it explains why they don’t want to become as we are.

The second serie of photographs that have been awarded at the Moscow International Fotos Awards is a serie about children that I’ve started in these arabic countries.

Children there only wish to play and are not scary yet of what we are as european. They were only very curious about me, asking me what I was doing here, why I was taken photographs of them. But they never refused to be photographed!

I’m telling you, it’s easier to take photographs of children there than in France where people think you are a pedophile if you do the same!

You can see here only curiosity and joy in their eyes! Life in these countries and especially where I’ve been is not that easy as in France for example. But they never complained!

They don’t have any Game Boy, Playstation, smartphones or tablets! They play with their hands and with their imagination! Everything is supposed to be a game. They’re not enclosed all the day in front of a screen!

They’re probably more open minded than ours who browse on Internet all the day long! I don’t say that modernity is bad, but we don’t know if all these modern devices that we give to our children are not going to build a new (dis)connected generation of people!

We’re now, and I’m the first, all dependent of our connected tools. What is going to happen the day when these devices cease to work? We’re not anymore capable to talk to your neighbors, we prefer to chat on Messenger or to send an email!

We should not forget there is a life beyond our computers and smartphones, we’re not only brains! The modernity is really fascinating and future devices sound like crazy! I’m really looking forward to seeing how this world will change in the following years thanks to the networks.

But we shouldn’t never forget where we came from and that life is not a status on Facebook!

My intention with these 2 series of photographs was to show that the human race is capable of marvelous and beautiful things! It has been proved many and many times since millenaries with the Great Pyramids of Egypt and all the new buildings which now have less footprints over our environment.

I’m deeply confident that only the upcoming new inventions will be able to save us, collectively, as a human race.

But we also must teach to the next generations that like is not living through a screen. There are beautiful things outside, we just need to open our doors and our minds and to step outside!

4 Comments on MIFA 2014 – My winning photographs