The serie of 15 photos presented below was carried out during my stay of one month in Cairo in December 2013 with the aim of going to meet the Egyptian street and understand what has changed in their daily life due to two revolutions of 2011 and 2013.

This reportage has been chosen with 30 others among 250 applications to compete at VISA Off 2014 festival of Perpignan and exhibited 3 weeks in a fashion shop and gallery in the center of the city of Perpignan.

VISA festival takes place every year in the entire city of Perpignan, from late August to mid-September for a period of 15 days. This is the main and most important festival of photojournalism in France and in the world.

This festival not only offers exhibitions spread across the city, but also conferences, international meetings and discounts prestigious global photographers rewarding the best stories.

Winter is particularly tough this year in Cairo

For the first time in over 120 years the snow has arrived at the gates of the Egyptian capital, and in the morning of 13 December, I scan desperately pyramids from the 36th floor of the building of the National TV located in the center of Cairo along the Nile. But the long-awaited miracle will not happen and I will not have my shot of the pyramids covered by snow.

Whatever, for 10 days since I arrived in Cairo to exhibit my pictures, encounters keep coming. With the fear of unrest, tourists are scarce in Cairo for 2 years. While Egyptians often approach me. They are curious about what I do here, to know the perception of foreign overlooked the political situation of the country. They make it a point of honor to invite me to eat at their table to discuss with me, telling me their stories and how they experienced the successive revolutions.

Many times I was taken to see Tahrir Square, the epicenter of the great momentum of freedom that has gripped Egypt there 2 years. I could walk for hours in the adjacent streets with my camera, guided by locals, constantly challenged by the huge smiles of passersby and merchants. Many were those who wanted me to immortalize their picture with my camera. I spent hours in cafes to listen and take the pulse of the street.

Here, the predominant feeling is misunderstanding. The misunderstanding with respect to the West, which has dropped while they were fighting for their freedom. Because no, the people are not in themselves revolted against Mubarak still enjoys a good popularity rating, but against his will to pass power to his son. This is what has lit the fuse and that started it all! 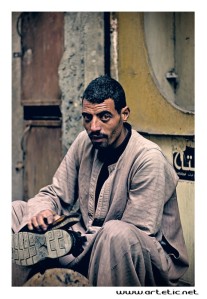 The Egyptians are not against authoritarian regimes. The face of Nasser often returns in all the conversations as the example and the model. The man can be loved or hated, but he is respected because he has restored pride to the Egyptian people. And pride, the country aspires to find her again.

Mubarak’s fall was seen as an extraordinary catalyst for freedom. But the country was not ready. More than 30 years of autocratic rule have not allowed the emergence of an organized opposition. Only the Muslim Brotherhood was organized with a fine grid across the country, from large cities to smaller remote villages. The only organized political force to speak of.

Young people who were on the initiative and at the head of the revolution of 2011 saw therefore confiscated the ideals for which they fought so much.

From a purely Egyptian point of view I’m only relate here, the prevailing feeling is that the 2012 elections were stolen by the Brotherhood. These first democratic elections did not allow one to identify the clear majority for any of the parties involved.

The Brotherhood, with their mesh of the country and their structuring chose to push through taking the country hostage: “Either you leave us the power, the country is going to experience civil war.” 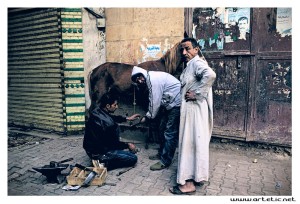 Blacksmith working in the street of Cairo

The army, the traditional mainstay of the country but weakened by the fall of Mubarak let them do and Mohammed Morsi was elected president.

Less than one year later, in July 2013, the same president was driven by more than 15 million people took to the streets and General Al Sissi was called to replace him.

Six months later, the economic situation is still very bad. The unrest has driven tourists and therefore foreign exchange earnings. Political instability has driven capital, many companies have put the key under the door and the exchange rate of the Egyptian pound has sharply depreciated bidding the purchase of foreign products.

Youths are distraught because no place is made to them in the new institutions and the power is back in the hands of the army but with the tacit agreement to prepare a political transition horizon 10 years.

The fact is that the Egyptian people are now tired of these disorders. What is democracy if it’s pushed back to 40 years ago? For the most part they now openly aspire to return to calm and many hope that the new powers will pull the country out of the rut as did Nasser there over 50 years.

From all this I draw, personally, a great lesson. These people are far from being desperate! Everyone knows that the situation is tough, but all are each expressed their willingness to make the necessary efforts to help the country to get better, to work! 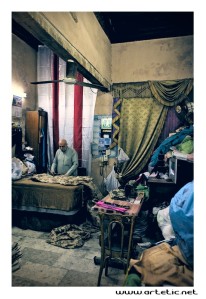 Beyond the parties and religions, the Egyptian people seemed united, Copts and Muslims together!

One proof is that most Copts shops proudly and openly bear the portrait of the Patriarch of Alexandria. Also I could see this huge city to acquire the Christmas decorations from the end of December.

The chance of this country is that people feel Egyptian before feeling of a particular religion or party. National pride and the weight of the history of this country unite in the same pot!

And all dream together of a new Nasser. The phrase that best sums certainly thought that prevails in Cairo is one, heard during one of my many discussions:

“Egypt, as far back as history has always been ruled by strongmen, autocrats and authoritarian who were able to serve their people and their country. Only this provided that the people rally behind such a man. We are not ready to democracy, and it is not even sure it would suit here. So stop to wish to impose a system that is not part of our history and of our genes and let us follow our own path.”

And also it will take time … after all … the pyramids were not built in one night! 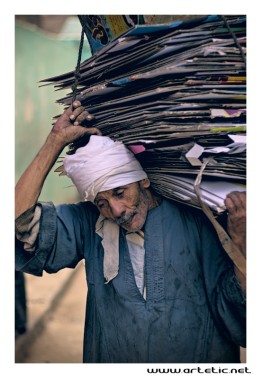 Winter is hard this year. The snow has arrived at the gates of the Egyptian capital and the sun is hidden by the clouds for several days. The cold is lastingly installed in the streets and locals are led to seek and carry combustibles for heating. 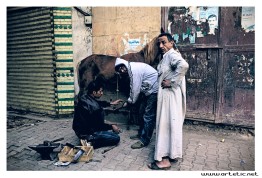 The stalls of street vendors are mostly from the recovery of old cars that are fully disassembled and refitted. Here, for example, the fuel tank was reused as an area of ​storage for foul medames, the wings are the table bar, the hood becomes the kitchen area, etc. The foul is a dish of North Africa and the Middle East with beans. Calorie, protein, long to digest and especially little expensive, it is considered by Egyptians as a “donation of god “.

The most impressive is what these traders can put and store in very tight spaces! The ingenuity is appropriate and these storekeepers show imagination and a big sense of the arrangement! And keep in mind that the night, all the goods have to be under key inside the small house! 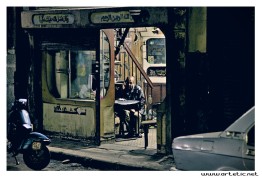 The shops open early in the morning and stay open until very late at night even when customers are scarce. In those quiet moments, the reading of newspapers often establishes the activity the most appreciated to pass the time. This seller of spare parts for cars chose as for him to kill time by means of its telephone.

Al Ahram newspaper is the oldest daily paper, the most read and most spread by Egypt and by all the Middle East with an edition of more than one million copies. Nevertheless, his closeness with the successive military powers and the opening of the press less soft independent newspapers with the powers in position made him lose about 40 % of his electorate since 2011. This prompted the newspaper to change its mode of governance, its editorial line and to publish a supplement closer to aspiration of the youth of the country. A revolution is there also happening, the Revolution of the information. 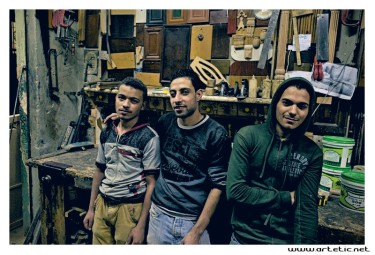 Since the dawn of time, the shops, the expertise and the tools are passed from father to son. We often see young artisans in their early twenties at the head of their own business using 100 years old machines and tools that belonged to their grandfather or great-grandfather. 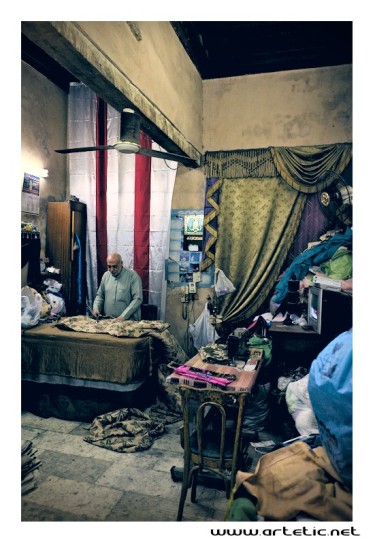 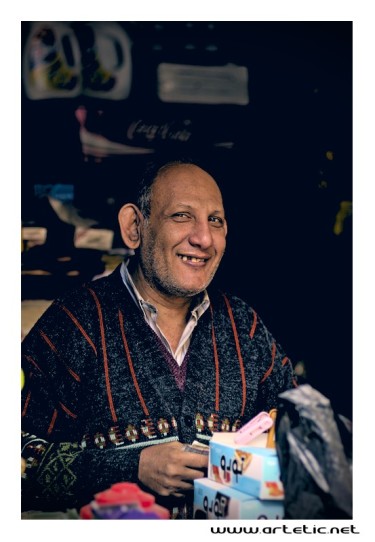 The most worrying for this wonderful country is that tourists have deserted the destination because of disorders and insurrectional situation that is making the economy conditions complicated. The capital fled the country, numerous companies put the key under the door and the unemployment is omnipresent But despite that I had almost never seen so many smiling and caring people in the streets. 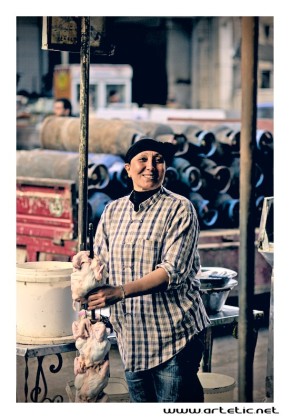 People are very happy to see foreigners walking the streets. I was approached and questioned on numerous occasions on the vision of Egypt that foreigners may have. Here, people seem to have been completely abandoned by the western in their struggle for freedom and they do not understand it!

Egyptians are proud to remind that at all times the country has been ruled by authoritarian and strong men in the service of the people. This is now pinning its hopes on the General Al Sissi who we can see on the picture at the back of this shop. Will he put the country back on the right path? Here, everyone wants to believe it!

Young people are deeply involved in the profound changes facing the country in the last 2 years. As in the middle of this street transformed into huge coffee, the young people like finding themselves in the evening around a good shisha to discuss. They command tea, coffee either karkadé and play the last video games on console or look at the European championships of soccer at the TV. It is then the opportunity for them to change the world up to the night end and for me to take the pulse of what they think of the situation of their country.

Children like to spend their time on the streets much of the day to indulge in their favorite games around the people who go about their lives. The streets are noisy with all these games and good mood is palpable everywhere you walk making this city a lively one in spite of the stifling pollution. 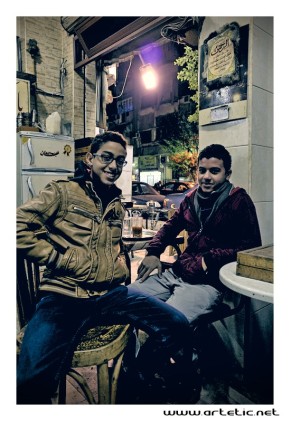 On leaving school, the oldest take a break at the café of their area for a cup of tea and often start working on their homework for the next day. Despite all the troubles, everyone here is aware that only education will enable the country to have a better future. Because here as somewhere else, the future rests on the education of the youngest and on their understanding of problems bound to this country situated in the confluence of the West and the East.