Documenting life and history of a Sotho tribe of Southern Africa!

The Sotho people are one of the most important ethnic groups in South Africa whose homeland is Lesotho, a kingdom located in the Drakensberg Mountains, entirely surrounded by South Africa and alongside the Free State province.

Due to the successive wars against the Zulus and Boers expansion attempts in the 19e century, some groups of Sotho people migrated north up to Zambia and beyond toward the west. That’s why Sotho people are now spread over a very large territory of Southern Africa, from the Indian Ocean to the Atlantic Ocean.

Origins of the project and purpose of the photographic work

I went first in South Africa in July 2014 to make contact. I then met a business man living in Johannesburg wishing to document the life and history of his village. This man is Mesotho (meaning is part of the Besotho tribe) and his village is located in the heart of the Sotho area, close to the Lesotho country. He told me a lot about his village, his family and the history of his tribe and we decided to document this story.

I then went back again end of 2014 in South Africa with the purpose to stay 2 weeks in his village during Christmas and New Year holidays to meet his family and clan and take photographs of the living and of the people there.

A long journey to reach our destination!

With almost 2 days late, the car was full of goods and purchases for Christmas. As this is a remote village, every member of the family needs to bring food and stuff for the time of holydays. The car is an old but reliable Pajero that is useful to drive on the dirty tracks around of the village. 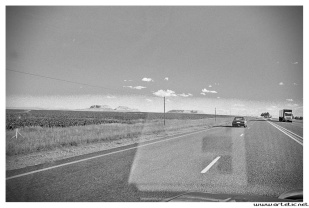 As we leave 2 days after the beginning of the holidays, the traffic is fluid and we don’t waste time within traffic jam. That’s a good thing because you can be stuck hours on the road just to drive 10km. It’s 3PM when we leave and we have almost 10 hours to drive, 5 hours on the highway and 5 more on the road across the mountains.

The village of Pontseng is about 800km away from Johannesburg and 1500m high. One thing you need to know is that Johannesburg is situated on a giant plateau which is 1800m high! That’s why the climate there is almost perfect, I mean dry and never too cold or too hot.

Most of the country is located on this plateau and you really need to get close to the ocean to descend in altitude! I mean that when we left the highway to the road at Howick, this city is still more than 1000 m high and less than 90 km away from the ocean!

More than the night, our travel has been slowed down by the mist and the rain we faced in the mountains. We could hardly see the road more than 10m away and driving was almost dangerous. Then, in the middle of the night, after 10 hours drive we arrived in the village without any sign of light and life… 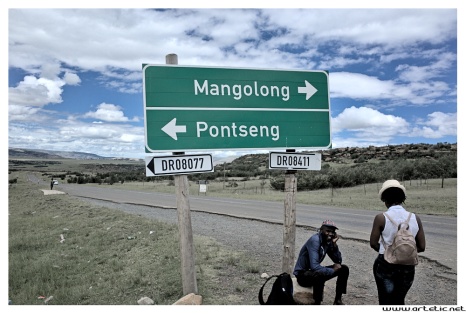 As there is no electricity in the village, everything was dark and I wasn’t able to see anything. That’s why I took this picture of the Pontseng’s sign 2 or 3 days later on day light to show you the crossroad that leads to the village.

A typical village in Sotho homeland!

Pontseng is a small village with may be less than 200 small houses and 1000 inhabitants. It’s located on a small plateau above a river and at the foot of a small mountain. The village is served by only a dirt track which heads to the main road 7 km away or to another dirt track that serves most of the remote village of the area. 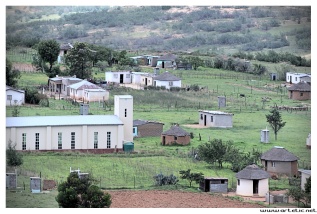 The most important places in such a village are the square where taxis stop to take people, the church (be Catholic, Protestant or Methodist churches), the preschool and school buildings and the shop!

Some of the houses there have their own tanks (from small to big) to store water rain as the river is more than 1h away by walk. You can see some of those tanks in the above pictures, most of the time blue or green. You can also see that every house got latrines outside. They’re all build on the same model: a small building with a pipe to evacuate smells.

Pontseng is a village located in the foothill of the Drakensberg mountains. I mean that the highest mountains which are more than 3 000 m high are located in Lesotho and are the borders with South Africa making this country like a sanctuary hard to access!

The Drakensberg side of South Africa is a plateau 1500 m high with small mountains probably 2000 m high. And wherever you are you can see the steep and high cliffs that mark the borders between the 2 countries! 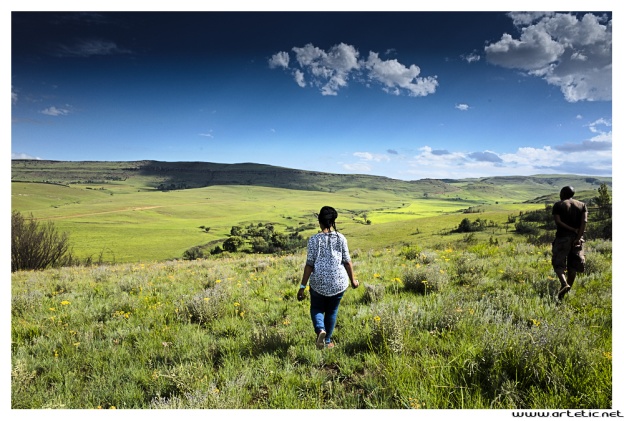 What is amazing is that those mountains are all the time covered by the clouds, even when the countryside around has a clear sky! I understand now why Lesotho is called the country of rains and supplies water to South Africa! The picture above show you how the fields on the plateau are sunny while in the same time it’s raining over the mountains only 20 km away. Really amazing!

Work in progress… be patient…

Photos of the reportage 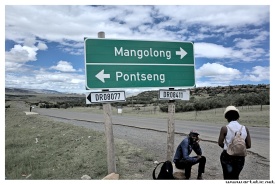 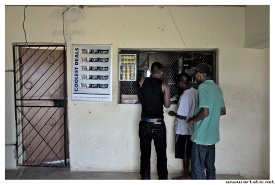 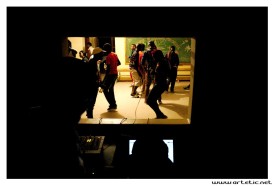 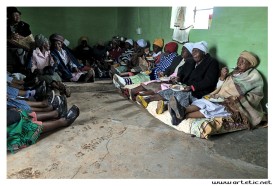 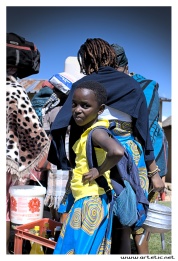 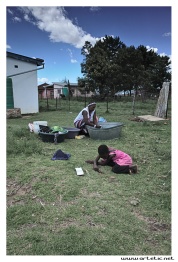 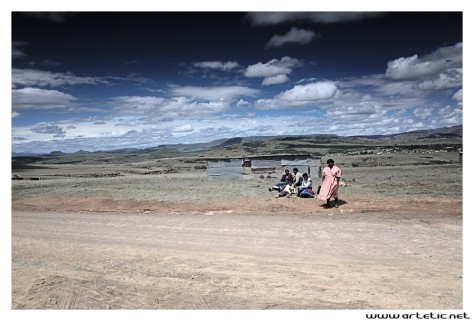 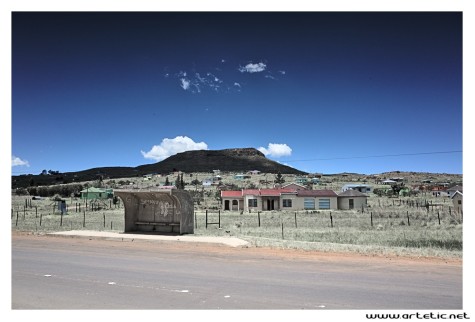 1 Comment on An immersive photo journey in Sotho homeland